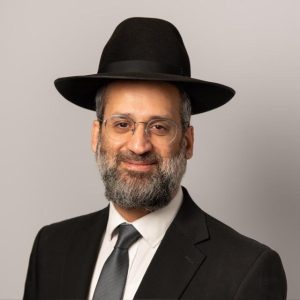 Rabbi Yossi David was born in Gateshead, near Newcastle in the U.K. but was raised in Buenos Aires in Argentina and moved back to London at the age of 12.

He attended High School in North London and then studied in Shaare Torah Manchester for 4 years before studying in the famous Ponevish Yeshiva in Bnei Brak in Israel under the leadership of Maran Harav Shach.

After marrying his wife, Sharona, he continued to study in Yeshiva until joining the Kollel Darchei Horaha under the guidance and leadership of The Rishon LeZion Rabbi Mordechai Eliyahu Z”L in Jerusalem for 12 years. During this time, he gained Rabbinical Ordination (Semicha) for Rabanut and Dayanut from Rabbi Eliyahu and from the Chief Rabbi Of Jerusalem, Rabbi Shalom Mashash and the Rabbanut Harashit.

In 2008, he moved back to London and became the Assistant Rabbi to his father, Dayan Abraham David at the Od Yosef Hai Synagogue and Yeshiva in Hendon, London. As well as being the Assistant Rabbi, he is involved in directing the religious ethos of Nancy Reuben Primary School as well as being one of the School Governors. He gives regular shiurim to his congregants both at Od Yosef Hai and at private homes in North-West London. He gives shurirm in other communities and is in popular demand.

Rabbi Yossi has made a huge and dramatic impact on our constantly growing Young Professionals. He pushes our YPs forward, collectively with their wives with a series of shiurim (lectures), or isolated in one-on-one executive learning sessions. He  works hard to stretch and expand their intellectual capacity with he in-depth and diverse knowledge of diverse topics. 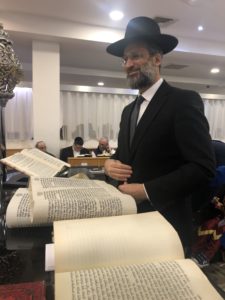 The Rabbi starts his day for the community with his Daily  “Early Birds” shiur, (6.00 am) before morning prayers, and is intermittently available through his busy learning schedule whilst running the Od Yosef Hai kollel, right up until the late hours of the night with his selfless support and guidance he is always available to help the new young couples and professionals with a listening ear to turn to.

The Od Yosef Hai Community is privileged to have in their midst, a sought-after Talmid Chacham giving all his time to the needs of the community. In 2018 Rabbi Yossi was appointed Dayan to oversee the Sephardi Kashrut Authority.

In March 2021, prior to Pesach, Rabbi Yossi David, with the assistance of Aaron Isaac, set up a new What’s App Group, called “Rav Yossi Halacha Q&A”. it started with people asking halachic questions relating to Pesach and it proved so successful that it was kept open for the whole year. It has enabled people to have simple or complex halachic questions to be answered and to date hundreds and hundreds of halachic questions have been answered.